Human Umbilical Cord Tissue Derived Mesenchymal Stromal Cells are tissue from umbilical cords when a baby is born. This biological product is regulated by the FDA. It is found in blood vessels of the placenta and umbilical cord. It is collected after a baby is born and after the umbilical cord is cut.
“Because cord blood is typically collected after the baby is delivered and the cord is cut, the procedure is generally safe for the mother and baby,” says Keither Wonnocott, PhD, Chief of the Cellular Therapies Branch in FDA’s Office of Cellular, Tissue and Gene Therapies.

Uses Approved by the FDA

Cord blood is approved only for use in “hematopoietic stem cell transplantation” procedures. They are performed on patients with disorders affecting the hematopoietic (blood forming) system.
Cord blood contains blood forming stem cells that can be used in the treatment of patients with blood cancers such as leukemias and lymphomas, in addition to certain disorders of the blood and immune systems such as sickle cell disease and Wiskott-Aldrich syndrome.
It looks like they found a loophole by fast tracking it
https://www.fda.gov/media/120267/download
FDA issued a warning against unapproved stem cell uses:
https://www.fda.gov/news-events/press-announcements/statement-fda-commissioner-scott-gottlieb-md-and-biologics-center-director-peter-marks-md-phd-fdas
CORD BLOOD IS ONLY APPROVED FOR SICKLE CELL ANEMIA AND SOME CANCERS!!!

Is Cord Blood a Miracle Cure?

The FDA says it is not a miracle cure for anything. Some parents bank it as “insurance.” Remember it is only approved for blood related illnesses. In some cases, the stored blood may not be suited for use in the child who donated it. “For instance, you can’t cure some disease or genetic defects with cord blood that contains the same disease or defect,” Karandish says.

Logical Problem With Cord Blood as a Cure

As a mother who had 3 biological children, there is an option to donate the cord blood of new born babies if the price of banking them is too expensive. Most children no a days are diagnosed as toddlers. If cord blood from these banks are infused, how do they know that this blood does not come from autistic babies? 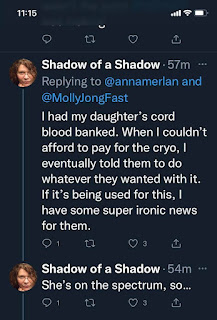 What is In the Infusions?

The autism trials use a type of immune cells called monocytes, which is a type of white blood cell.

Side effects from stem cells

What Does this have to do with Autism?

How the study is conducted:

25 autistic children aged from ages 2-5 were selected. They were selected based on speech, socialization skills,  contact. In other words, behaviors that ABA aims to hide to make children appear not autistic. This is a double blind study. It is placebo controlled in phase 2.
The participants parents were given questionnaires to fill out. They based their eligibility based on questionnaires, IQ and autism signs.
In phase I, all 25 participants had their own available cord blood from when they were born in a blood bank. On the day of infusion, the cord blood was thawed and washed in detran 40+5% albumin and placed in 1.25 ml/kg DA for administration. The cord blood was tested for stability. The cord blood was infused intravenously into the participants. In some cases, the participant was sedated if they were not cooperating. These children were not able to give consent and did not understand what was happening to them.

After writing this blog originally, Ann Borden King did some further research which she shared with me:

“ Agitation during the infusion procedure was common. The process of coming to a new medical center, having an IV placed and labs drawn, being monitored with a pulse oximeter and blood pressure cuff, and being observed in a foreign environment among strangers is stressful for most children, and particularly for children with ASD.
“In some inflammatory conditions [sic] repeated doses or prolonged courses of therapy are required for a sustained effect. In this small study, number of doses was not associated with measures of clinical improvement. Thus, given the stressful nature of the infusion experience, we have elected to pursue a strategy of increased dose, rather than increased number of doses, in our next clinical trial.
“We also used oral versed as a premed in some children to decrease anxiety and facilitate cooperation with IV placement.
“Two children in this series experienced infusion reactions during MSC administration requiring medical interventions. Although the definitive etiology of these reactions cannot be clear, it is likely that they were due to reactions to DMSO, which has been widely reported with administration of cryopreserved products. In one case, premeds were held owing to a parental request.
“In the other participant who received premedication per protocol, hypotension occurred and required treatment. Both children recovered, but the occurrence of these events emphasizes the need for children to be treated with MSC therapy in a controlled setting with a secure IV, physiological monitoring, and medical personnel in attendance to identify and treat reactions at their earliest presentation.”
The $15 million originated from the Marcus Foundation. The Marcus foundation is owned by Bernard Marcus, the CEO of Home Depot. This is the same person who donated $25 million to start up Autism Speaks. And they claim they are not looking for a cure but their actions say otherwise.

The study physician claims that he is “cautiously optimistic” that the autistic children will “improve.”
All but three of the participants were assessed 12 months after the infusion. They attest any “improvement” to the stem cells. They do not count the different therapies that the children might be involved with.

Buy In For Those Not in The Study

This unproven treatment can be bought for between $10,000 and  $15,000 when parents cannot enroll thier children into a clinical trial. This is called the Expanded Access Program (EAP). This price is for a SINGLE infusion.

What do these have in common? A recruiter for FMT has subjected her son to stem cell studies at this same university:

A for profit company Cryo -Cell International partnered with Duke University has announced plans to open clinics to promote these unproven treatments. This is under a licensing agreement with Duke.In this agreement, there is an exclusive patent option agreement with Duke which allows it to manufucture and sell products based on patents from Dr. Joanne Kurtzberg.  During the investor presentiment, Cryo-cell stated that they plan to become “an autonomous, vertically integrated cell therapy company that treats patients.”
The company and the university are rushing to monetize a procedure before its proven to have benefits. This has created concern across the community of scientists, clinicians, medical ethicist and autistic advocates.
Duke and Cryo Cell told investors that they plan on opening infusion centers that the price of each infusion will be $15,000. They estimate revenue to be $24 million per clinic. They have not disclosed how many of these clinics will be opened. The first one will be opened in Durham, North Carolina.

A new study was published in JAMA Network Open. The investigation started in 2018 after public health officials began reviewing reports of bacterial infections in stem cell patients. At least 20 patients in 8 states developed serious infections after receiving a cord blood infusion.
The infection was taped back to a single stem cell manufacturing lab in California. Over half of the samples were tested by the CDC were found to be contaminated with E Coli and other bacteria. The samples that were positive were recalled to prevent further exposure.
This shows that these blood products are not fully tested before being infused in a patient. This is very scary.
Sources:
https://www.fda.gov/consumers/consumer-updates/cord-blood-what-you-need-know#:~:text=Cord%20blood%20contains%20blood%2Dforming,disease%20and%20Wiskott%2DAldrich%20syndrome.
https://stemcellsjournals.onlinelibrary.wiley.com/doi/full/10.1002/sctm.16-0474
https://www.vice.com/en/article/qj87xm/a-controversial-autism-treatment-is-about-to-become-a-very-big-business
https://www.painnewsnetwork.org/stories/2021/10/7/study-warns-of-serious-risks-in-unproven-stem-cell-products